You are here: Home / Agriculture / Plan seeks to plant miles of milkweeds for monarchs 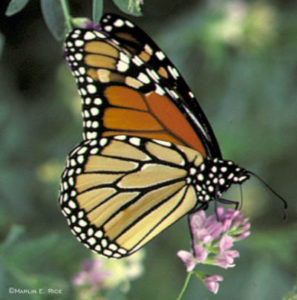 A coalition of groups called the Iowa Monarch Conservation Consortium is hoping to devote hundreds of thousands of acres of Iowa land to become habitat for the butterfly.

Professor Steve Bradbury, in Iowa State University’s Department of Natural Resource Ecology and Management, says the plan is to guide the implementation of a voluntary, statewide conservation effort based on the best available science.

“The group broke out goals by different kinds of land use and land cover,” Bradbury says. “So, there are targets set up for urban and suburban landscapes and for public land, land owned by counties or state or federal government.” Other targets for habitat range from agricultural land to road right-of-ways.

Bradbury says the group recognizes the vital importance of Iowa’s farmland to industries including corn, soybeans and livestock. “Our strategy is not designed to disrupt that agricultural production but how to take advantage of farm bill programs, for example, the CRP program,” Bradbury says, “but also how to take a look at grassy areas in the agricultural landscape where we could establish this habitat.”

The orange-and-black insects are a key factor in providing pollination services to agriculture that are estimated to be worth $3 billion a year.   The Iowa Monarch Conservation Strategy calls for establishing between 480,000 and 830,000 acres of monarch habitat statewide by 2038.

“Right now, there are many counties in the state that have plans in place and programs in place to try to increase biodiversity on the roadsides,” Bradbury says. “Our strategy is to take advantage of those existing activities and augment them to include plant species that are important to the monarch.”

The plan calls for the planting of up to 188-million new milkweeds in Iowa over the coming two decades. Milkweeds are where monarchs exclusively lay their eggs.  Studies are finding populations of monarchs across the continent have dropped as much as 80-percent in the past 20 years. The U.S. Fish and Wildlife Service has until June of 2019 to determine whether the monarch should be listed under the Endangered Species Act.