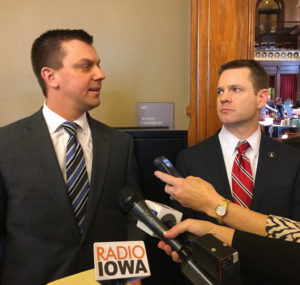 A new leadership team is now in place in the Iowa Senate, changes prompted by a GOP senator’s dramatic exit Monday.

Senator Bill Dix had been the top Republican leader in the senate, but he resigned after images posted online showed him kissing a lobbyist. The 28 Republicans who remain in the senate met this morning and elected Jack Whitver of Ankeny to be the Senate Majority Leader.

“I believe it is a new day in the state of Iowa and in the Iowa Senate,” Whitver told reporters shortly after the private meeting, “and we look forward to moving forward.”

The Senate Republicans refer to themselves as a “Caucus” and Whitver said he’s honored to be their new leader.

“I’ve been down here eight years and I’ve never walked out of a Caucus room that was more united, that felt good about what they’re doing and where they’re going,” Whitver said, repeating that, “it’s a new day in the senate and we look forward to getting to work.”

Schneider, the new senate president, has been chairman of the Senate Appropriations Committee and he expects to remain in that role as well.

“Obviously it’s not something I’d anticipated happening when I woke up on Monday,” Schneider told reporters, “but circumstances being what they were, I thought I could help contribute…to the senate and moving things forward and getting things accomplished.”

Schneider indicated one of his priorities will be implementing a former senator’s Human Resources recommendations after a fired Senate GOP staff member who said she was sexually harassed won a $1.75 million settlement from the state.

“One of the first things I plan to do is sit down with the (legislature’s) new human resources director that we have and get an update on the status and complete any work that needs to be done,” Schneider said.

House Speaker Linda Upmeyer of Clear Lake said she and the 58 other Republicans in the House look forward to working with Whitver and his team on “shared priorities” during the “homestretch of the legislative session.” Governor Reynolds issued a statement congratulating the new leadership trio in the Iowa Senate, saying she looks forward to working with them on “building a better Iowa.”

Janet Petersen, the top Democrat in the Iowa Senate, said the new GOP leaders in the senate “have an obligation” to change the culture in the capitol. Petersen said Republicans should demand the money former Senator Dix raised for his and other 2018 campaigns be used, instead, to cover the $1.75 million settlement over “illegal behavior” directed at former GOP staffer Kirsten Anderson.