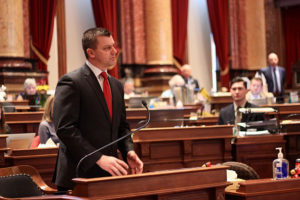 The GOP leadership transition was completed this morning in the Iowa Senate.

“Today I rise to speak in a new role and I want to thank my colleagues for the confidence to select me as our new Republican Majority Leader,” said Senator Jack Whitver, a Republican from Ankeny.

Whitver was chosen by his GOP colleagues yesterday in a private meeting. It’s the top job in the senate, a job became vacant Monday after Senate GOP Leader Bill Dix resigned, just hours after  images of the married senator kissing a lobbyist in a bar were posted on the internet. Whitver had been the president of the senate since January of 2017.

“I know the office and the title and the responsibilities have changed,” Whitver said. “The goal has not changed. I ran for office seven years ago to make Iowa a better place.”

Whitver, a former Iowa State football player, is 37 years old, married and the father of three young children. Whitver describes himself as a “new generation of leaders” who are pursing an “Iowa agenda.” He also touted the recent U.S. News and World Report analysis of a variety of factors indicating Iowa is America’s top state.

“It’s easier to get the top than to stay at the top…I want to challenge this body, the House, the governor, our state to continue to make the tough choices needed to keep us as the number one state in the nation,” Whitver said. “…I look forward to working with each and every one of you as we continue to try to make Iowa a model for the other 49 states to follow.”

Republican Senator Charles Schneider of West Des Moines was sworn in as Senate President. Schneider was handed the gavel he’ll use in his new role — and quipped: “I’ll try not to break it,” as his colleagues applauded.

Schneider gave a brief speech to his colleagues.

“I’ve proudly served the 22nd district for the past six years,” Schneider said. “Now, it is an absolute honor to not just serve my district, but all of you who represent the entirety of the state of Iowa.”

Schneider is now second in line to be governor, if current Governor Kim Reynolds leaves office.

“The core of our leadership stays the same,” Schneider said. “We are here to lead on behalf of our constituents. The citizens of Iowa sent us here to make good on the promises we made to them during our elections and we have listened to them.”

Neither Schneider nor Whitver mentioned the name of their Republican colleague who resigned Monday. Whitver, though, did acknowledge a leadership chance in the middle of a legislative session was unusual.

“I look forward to a seamless transition as we continue to work on our priorities,” Whitver said.

Schneider offered his own punctuation mark to a tumultuous week for Senate Republicans.

“All right,” Schneider said after the applause died down this morning. “Back to work.”