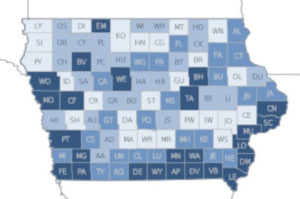 A new report ranks all 99 of Iowa’s counties for their health, based on criteria like access to good doctors, education and affordable housing.

Katie Wehr, senior program officer at the Robert Wood Johnson Foundation, says a host of key factors, like where we live, play a definite role in how well we live and for how long.

“Those include not only health behaviors, like what you might consider healthy eating or smoking or even clinical care,” Wehr says, “but it’s also looking at social and economic differences in our communities, aspects like child poverty or high school graduation rates or employment.”

The new rankings list Iowa’s five healthiest counties as: Grundy, Sioux, Cedar, Dallas and Winneshiek, while the five counties in the poorest health are: Monona, Appanoose, Decatur, Audubon and Lee.

“What’s most important is that no matter where counties are ranked, it’s about recognizing there are areas for improvement and that the county ranking is a starting point, not an ending point,” Wehr says. “County residents and their leaders can take a look at the data, identify where they’re doing well and where they can continue to improve in their journey to better health for all people.”

She says the local-level information makes it clear good health is influenced by many factors beyond medical care including housing, education and jobs. “You can compare counties, so if there are peer counties you’d like to compare yourself to both within your state and in other states, you can take a look at that and see how you’re doing and take a deeper dive into not just the rank but those different elements that go into the rank, those different measures that help to contribute.”

The new report says poverty limits opportunity and increases the chance of poor health.   Children in poverty are less likely to have access to well-resourced and quality schools, and have fewer chances to be prepared for living wage jobs. The report reveals that in Iowa, 15% of children live in poverty, compared to the national rate of 20%.