You are here: Home / Crime / Courts / Victims not happy with court ruling on 2011 Missouri River flooding 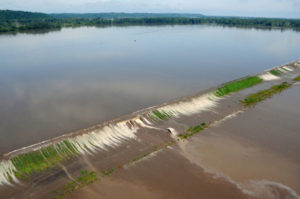 Flooding on the Missouri River in 2011.

Leaders of some Missouri River towns are angered and confused by this week’s federal court ruling saying the U.S. Army Corps of Engineers was responsible for damage from repeated flooding.

The case singled out five years over the past decade for which the Corps was liable, but did not include the 2011 flood. Donna Forker, Sioux City’s finance director, says 2011 is when the city was hit with the greatest flood expenses.

“We spent about $3.3 million with prevention, recovery and cleanup,” Forker says. “FEMA and the Iowa Department of Emergency Management have provided funds to offset some of that.” The case covered claims from more than 370 farmers, landowners and business owners in Iowa, Nebraska, Kansas and Missouri.

The judge’s ruling says the government must compensate the plaintiffs for damages which could exceed $300 million. South Sioux City Administrator Lance Hedquist doubts his city will see any of that money. “Nothing that I know has come into the city from anything we’ve had indicated,” Hedquist says. “It was an extremely strange ruling in terms of how they came up with some of those numbers in the past and then excluded the 2011 flood which was the biggest flood.”

The judge’s ruling noted changes the Corps made to river flows had the “direct, natural, and probable effect of causing flooding or more severe flooding” for five flood events since 2007, but excluded 2011. Hedquist says his city incurred no damage in the other years, but did in the 2011 flood.

“Only in 2011 did we have any cost that was incurred by the city. It was about $6 million as I recall that we spent for public repairs to the city,” Hedquist says. “The previous years, I don’t recall any actions that we took or any damages that occurred to the city of South Sioux City.” South Sioux City lost numerous trees to the 2011 flood, which left behind tons of sand and silt once the water went back down.

“It was obviously very expensive to the city. We had to keep track of the sand and where it went. You couldn’t just push the sand back into the river. We had to haul it off,” Hedquist says. “The trees were detrimental. We lost lots of very big trees. We’ve planted thousands of trees since then.” The suit was filed in 2014 in the U.S. Court of Federal Claims, alleging the Corps altered its practices regarding the river’s water storage, release and flow management. Donna Forker says she believes the case will remain in litigation for years to come.