You are here: Home / Crime / Courts / Extra officers out on the roadways for St. Patrick’s Day weekend 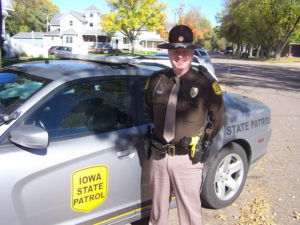 Saturday is St. Patrick’s Day and several law enforcement agencies plan to increase their presence on Iowa roads and highways with a Special Traffic Enforcement Project or STEP.

Iowa State Patrol trooper John Farley says St. Patrick’s Day is a common day to see an increase of intoxicated drivers on the highways and especially when the holiday falls on a weekend.

He says the weekend gives people more time to celebrate and he says the Iowa State Patrol is not against the celebration, they just want everyone to do it responsibly. Farley says people who’re stopped for drunk driving often say they had no choice but to drive themselves. He says that’s not true.

“We live in a time where we have so many options — not only just the designated drivers — but we have ride-sharing services, obviously cell phones at our disposal all the time so that we can easily call a cab service or any different options that we have,” according toe Farley. He says the STEP program provides extra funding to put more troopers on the road.

He says they will have their normal number of troopers, but will also have some working on overtime to help with the project. Troopers and other officers will be looking for drunk drivers and other violations throughout the weekend.