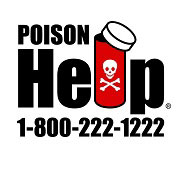 Tammy Noble, a registered nurse and spokeswoman for the Sioux City-based facility, says Iowa’s numbers are staying fairly constant and they come from all 99 counties, but calls to poison centers nationwide are gradually falling.

“The numbers are going down and I think it’s largely because there’s a lot more people using their computers and looking online to get the information,” Noble says, “which can be a little complicated.” While the internet is a vast source of information, there’s also a lot of misinformation, so Noble says relying on Google in a potential life-and-death situation isn’t the wisest idea, especially when experts are a free phone call away.

“Don’t guess, just call us and we’ll give you the recommendations that are needed and let you know if you have to go to the hospital,” Noble says. “Please know, the majority of the time for most poisonings, we can give you advice over the phone and tell you what to watch out for.” In recent years, there’s been a slight shift in the people about whom calls to the poison center are being made.

“We used to be over 50% of our calls were kids under the age of six, so, zero-to-five year olds,” Noble says. “Now, our numbers for 2017, it’s only about 44% of the calls are about those little ones.” While there’s an upturn in calls about adult poisonings, there’s also been an increase in calls about senior citizens. Calls regarding youngsters tend to come after a curious tyke has gotten into something they shouldn’t.

“Things you use every day that you don’t lock up, deodorant, lotion, shampoo, toothpaste, cosmetics and personal care products,” Noble says. “The good thing is, those products tend to be a little less dangerous and if a child gets into those, we can give you advice over the phone and tell you what to do.” Calls about Iowa teens chomping those colorful — and potentially toxic — laundry pods spiked back in January when viral videos began circulating online. Noble says they’re continuing to get two or three calls a week about laundry pods.

“We are still seeing kids that are unintentionally getting into it,” Noble says. “The product may be left out and mom is doing laundry and has the product out on the counter and the kids are getting into it, biting into it or they’re squeezing it and it gets into the kid’s eyes.” Calls to the ’round-the-clock hotline are free, confidential and always answered by a toxicology expert. The number is 800-222-1222.