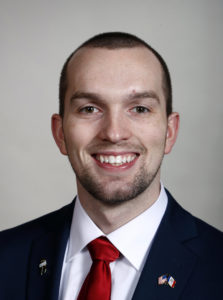 Republicans in the Iowa House have voted to take the first step toward giving Iowans the opportunity to add a gun rights amendment to the state’s constitution.

The same proposal would have to clear the legislature in 2019 or 2020 before Iowa voters could decide whether to add the gun rights language to the state’s constitution. If adopted, it requiring courts to strictly scrutinize any gun laws.

Representative Skyler Wheeler, a Republican from Orange City, dismissed what he called “lawyer talk” criticizing that part of the proposal.

“Whether you like it or not, we do have a fundamental individual right to keep and bear arms,” Wheeler said. “…And I like having a way to ensure that I keep that freedom against those who wish to strip that from me.”

Representative Mary Wolfe, a Democrat from Clinton, said the proposal would open up a “Pandora’s box” of litigation.

“And (it) would, in my opinion, result in the finding that a lot of our current gun safety laws are, in fact, unconstitutional,” Wolfe said.

Representative Matt Windschitl, a Republican from Missouri Valley, said the proposal will put a halt to “government over-reach” when it comes to gun regulations.

“If you just want to think I’m some crazy, gun-loving kook, fine. Have at that, but think about this: Voting ‘no’ on this here tonight is denying Iowans an opportunity to have their voice heard in what they want to have in their state constitution,” Windschitl said.

After three hours of debate, the House passed the proposal on a 54-42 vote. All 54 “yes” votes came from Republicans. Two Republicans — Representatives Dave Heaton of Mount Vernon and Andy McKean of Anamosa — joined all the Democrats in the House in voting no.