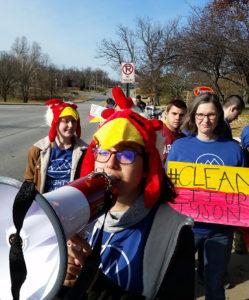 Several activist groups are planning a rally by the river in downtown Des Moines on Thursday — which is World Water Day.

Jessye Waxman, an Iowa field organizer for Mighty Earth, says they want to both celebrate and raise awareness about the importance of access to clean water. Waxman says, “We’re working to reduce the meat industry’s impact on water contamination and we’re trying to get the biggest meat producer in the country, Tyson Foods, to commit to buying animal feed grown using sustainable practices as a way to tackle this water pollution problem.”

Sixty-five percent of Iowa is dedicated to growing corn, soybeans and livestock, Waxman claims, and conventional growing practices bring significant runoff. “This has impacts on our environment. All of these nutrients, toxins, they run off and get into our waterways, cause a lot of ecological problems like leading to the ‘dead zone’ in the Gulf of Mexico which this year was the size of New Jersey,” Waxman says. “These heightened levels of nitrates are hazardous to our health. They increase rates of cancer and birth defects.”

The group claims more than 500,000 Iowans are exposed to unsafe levels of chemicals related to runoff from industrial agriculture.

“Enough is enough, right? It’s time that we demand an end to this pollution,” Waxman says. “It’s possible to have good food without damaging our health or the environment or the communities in which we’re raising and growing this food.”

The rally is scheduled for 5:15 PM on the River Walk beside the World Food Prize Hall of Laureates. It’s being organized by three groups: Mighty Earth, Iowa CCI, and the Des Moines branch of the Women’s International League for Peace and Freedom. For more information, visit the Mighty Earth Des Moines Facebook page.