You are here: Home / News / More snow expected in parts of Iowa before spring weather takes over 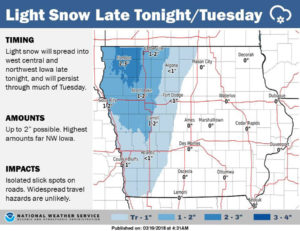 The calendar says Tuesday is the first day of spring but it won’t look or feel much like it in Iowa.

Meteorologist Allan Curtis, at the National Weather Service, says much of the state’s western third will be seeing snowflakes fly as spring arrives. “Fortunately, this thing coming through tonight into early tomorrow is pretty weak. We’re not talking about a lot of snow, one or two, might see three inches,” Curtis says. “Primarily, it’s going to be western Iowa and the heaviest amounts will be in the northwest corner, but most people are probably going to see an inch or less.”

Spring will officially arrive at 11:15 A.M./Central time Tuesday but temperatures won’t be very springlike for a while yet. “Unfortunately, we’re going to be on the cool side this week,” Curtis says. “Tomorrow, Tuesday, will probably be the coolest day where we only top out in the mid-30s to low-40s across the state. We will warm up a little bit, 40s into the low to mid-50s, but we’re not really looking at widespread 50s or 60s at least through this week and the early portions of next week.”

Kids who love winter weather who want to have one last snowball fight or cobble together a snowman will have to act quickly. “Certainly, getting snowfall through March and even through good chunks of April, it’s not too unusual and the good thing is with any of these spring snowfalls, they usually don’t last too long,” Curtis says. “It’s the same with this one. When it falls, it’ll likely be gone within a couple of days.” Some Iowans are already seeing green tulip and daffodil chutes emerge from the cold ground and that tender vegetation could get nipped.

“It would be a good idea to cover them for the next couple of nights, especially if you’re seeing growth already,” Curtis says. “We’re going to see lows dip down in northern Iowa into the low to mid-20s, but much of central and southern Iowa will be in the upper 20s. Certainly, if you have things starting to bud, it wouldn’t be a bad idea to cover them up.” Stay updated on the changing forecast by logging on to weather.gov.