You are here: Home / Crime / Courts / Sioux City man in hospital after weekend standoff with police 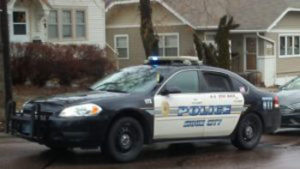 A man was taken to the hospital following a standoff on the west side of Sioux City Saturday.

Police Chief Rex Mueller says officers were called to the home at1906 Helmer Street on a welfare check. He says they heard shots inside the home when they arrived and brought in a SWAT team and crisis negotiators to try and talk to the man. Mueller doesn’t believe the man was shooting at anyone or anything outside the home.

Police evacuated some residents in the area, while others stayed in their homes. Police lost contact with the man and flew a drone around the residence and it detected no movement inside, so what’s called a “Flashbang” device was used before SWAT officers entered the home.

“They decided they could safely enter, located a male party inside the residence. He was not suffering any traumatic injuries — but at that time was unresponsive — but did have a pulse,” the chief says. The man, who has been identified as 58-year-old Robby Rusk, was taken to the hospital. His condition has not been released.