You are here: Home / Human Interest / Controversial Grant Wood painting to be shown in Iowa for first time (audio) 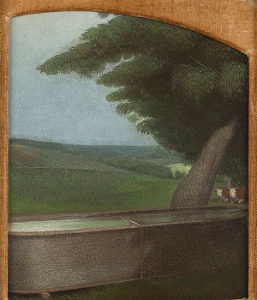 The “Sultry Night” painting after Wood sawed it in half.

The original painting of the work was sawed in half and burned by Wood himself. The content led to questions about Wood’s sexuality, according to Jared Ledesma, the exhibit’s curator. “The lithograph features a nude farm hand bathing at a trough by moonlight,” Ledesma says. “It’s full frontal nudity and it’s very authentic and realistic looking.”

It was seen as a major departure from other artistic representations of male bathers. The U.S. Postal Service deemed the print pornographic and refused to handle it while an international art exhibition refused to display it.

“Grant Wood executed a painting of the same scene while he was working on the lithograph but because of its rejection from an art fair and by his friends, he sawed off the portion of the canvas that included the nude male,” Ledesma says.

Wood torched the disputed half and all that remained of the painting was the trough and a couple of cows. Still, it was sold to a family in Madison, Wisconsin. The painting hasn’t been back in Iowa since Wood cut it in half in the 1930s. It’s always been in private hands and has never been publicly shown in Iowa — until now. 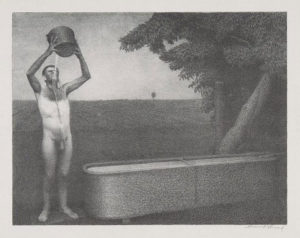 Wood, an Anamosa native who’s best known for the iconic painting “American Gothic,” never “came out” and there’s no factual evidence he was gay, but Ledesma says there were indications that pointed to the possibility.

The exhibition that includes “Sultry Night” also contains several early Impressionist paintings of the Iowa landscape Wood produced in the early 1920s. Many decades have passed and mindsets have changed, so Ledesma doesn’t anticipate there will be any controversy over the exhibit or “Sultry Night.”

“I think it will be popular,” Ledesma says, laughing, “because it’s Grant Wood. To be honest, I think people are aware that he’s talked about as being gay, I just don’t think it’s something that’s mentioned publicly often.”

The exhibit opens Friday, March 30th. An art history professor from Kansas City will give a lecture in May on the controversy surrounding the works. Admission to the Des Moines Art Center is free.