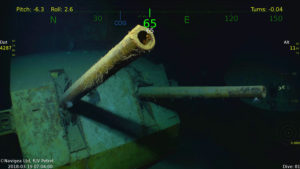 Underwater photo of a gun turrent on the Juneau. (Photo courtesy of Paul Allen)

News that the wreckage of the ship that five Iowa brothers were serving on in World War Two when they died stirred emotions at the museum in Waterloo that preserves their memory.

An expedition financed by Microsoft co-founder Paul Allen found the U.S.S. Juneau Saturday at the bottom of the South Pacific off the coast of the Solomon Islands. The spokesperson for the Sullivan Brothers Iowa Veterans Museum, Christy Decker, says the staff was not aware the expedition was underway.

“And the fact that they came across the U.S.S. Juneau and then specifically on St. Patrick’s Day obviously has kind of a unique tie to the five fighting Sullivan brothers — these five Irish guys from Waterloo here — we were all kind of in a state of disbelief,” Decker says.

George, Francis, Joseph, Madison and Albert Sullivan refused to serve unless assigned to the same ship, and they all died along with hundreds of others after the ship was hit by a Japanese submarine’s torpedo on November 13th, 1942. Decker and others had told the story of the five brothers for years — and now have another chapter to add.

“It kind of had a bitter-sweet feeling in the sense that there now is some real official closure for those 780 families that were affected by this,” Decker says. The death of the Sullivans became a rallying point for the war effort. Decker says visitors to the museum, especially school kids, often asked one question about the brothers. 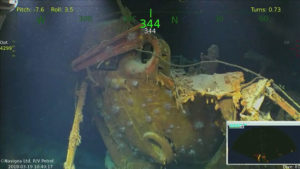 Letters on the wreckage confirmed the ship is the Juneau. (Photo courtesy of Paul Allen)

“So many people ask ‘where are they buried?’ And we have to let them know that they are actually not buried in a cemetery and their bodies went down with the ship in the Pacific Ocean,” Decker explains. She says they are now showing the pictures and videos  at the museum from the Research Vessel Petrel which discovered the ship. Decker says it adds more to the heroic story.

“There’s always still that little bit of the unknown or you kind of get that look — especially from the kids — and now we can share with them that the wreckage of ship has been found. I just really think that that’s going to help people understand the true sacrifice that these sailors went through and that their families endured,” according to Decker. Decker says

Kelly Sullivan, granddaughter of Albert Sullivan and grandniece to the others called the discovery of the Juneau on St. Patrick’s Day the “Luck of the Irish.” Decker says Kelly Sullivan was on the current navy destroyer named for the Sullivans when she heard the news. She had christened the destroyer back in 1995.

Decker says the discovery once again puts the spotlight on the five brothers and those who want to learn more of their story can visit the museum. “We have many Sullivan family artifacts, including five Christmas cards that were never ever opened. A friend of their mother Alleta actually send the boys Christmas cards in December of 1942,” Decker says. No one had yet know the Sullivans had died in the attack on their ship, but the return of those Christmas cards to the sender raised a lot of questions.

“After that happened and after no one had really heard from them in quite awhile — which was pretty rare — rumors kinds of started swirling and Alleta and the family was very, very nervous,” Decker says. “It wasn’t until January 10th that they got that official notice. Alleta held onto those Christmas cards for many, many years and they were eventually given to the museum.” Decker says they also have the Gold Star Flag that hung in the window of the  home of the Sullivans after the death of the brothers.

The Sullivan Brothers Iowa Veterans Museum is in downtown Waterloo and in light of the discovery of the ship, they are offering half price admission through Friday, March 23rd to allow the public to learn more about the Sullivan Family.