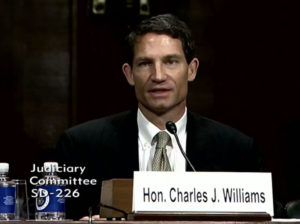 An Iowa magistrate judge in the U.S. Northern District of Iowa appeared before the U.S. Senate judiciary committee today for a hearing on his nomination to become the district judge for the region.

Charles Williams is a Mount Pleasant native who served as an Assistant United States Attorney in the Northern District of Iowa before becoming a magistrate judge. He was asked about his judicial philosophy. “I would decide cases based on the rule of law. Obviously my job as a district court judge would not be to make law — my job would be to apply the law as established by precedent, binding precedent, so that is how I would do my job,” Williams says.

Illinois Senator Dick Durbin questioned Williams about his involvement in the 2008 immigration raid at the Agriprocessors, plant in Postville and if he helped make decisions on how the workers found to be in the country illegally were handled. Williams says his role was mainly to check the search warrants and records used in the case.

“No, the disposition of the workers was set up as part of a procedure that was established by the leadership in my office, I again came in as an advisor and to help execute what had been established,” according to Williams. “The method of how it was set up and so forth was not something that I made decisions on.” Williams was asked how he feels about President Donald Trump commuting the sentence of former Agriprocessors chief executive Shalom Rubaskin.

“The system is set up the way that it is so the president has the complete discretion in order to commute a sentence. I note that he did not pardon Mr. Rubashkin, but he commuted the sentence, that’s the president’s prerogative and I have no dispute with that,” Williams says. He was asked again about how he would rule on cases.

“I turn to precedent. My job in particular — both as a magistrate judge, but if was fortunate enough to be confirmed as a district court judge — my job is to look at the binding precedents before me and to apply that precedent to the best of my ability,” Williams says. “You turn first obviously to counsel an to either their written arguments or oral arguments for guidance. But I do my own independent research, I have assistance from my law clerks and I will try to apply the law the best that I can interpret it.” Williams also works as an adjunct professor and teaches classes, such as evidence, to law school students at the University of Iowa. He was introduced by Iowa Senator Chuck Grassley who called him

“a very talented attorney and judge, who is widely respected and recommended across the political spectrum back home in Iowa. He is a lawyer’s lawyer. He is not political. He is not driven by ideology.”