You are here: Home / News / Opponents of anti-sanctuary cities bill rally at statehouse 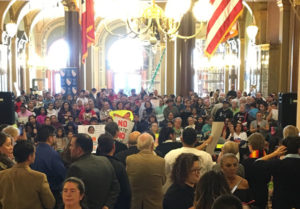 Hundreds gathered in the Iowa capitol this afternoon to rally against a bill designed to penalize any so-called sanctuary cities in the state.

“As an attempt at a partial, ill-conceived resolution of the immigration problem, I oppose Senate File 481,” Father Michael Amadeo, vicar general of the Des Moines Catholic Diocese, said, prompting a roar of approval from the crowd.

The bill Amadeo opposes would withhold state money from cities or counties declared “sanctuaries” for people at risk of deportation.

“We need to treat every other human being with dignity. Do unto others what you would do unto you,” Amadeo said. 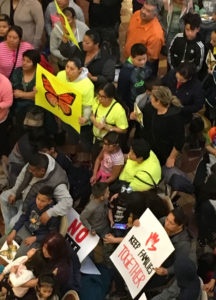 Another priest interpreted Amadeo’s remarks in Spanish. The crowd cheered and chanted, “Yes, we can” in Spanish during the rally. Father Amadeo urged legislators to “open their hearts” to new immigrants.

“Today in Iowa they work hard, they pay taxes, they are dedicated to family and human values that characterize the best of who we are as Americans,” the priest said. “Nearly every one of those that I have met is a good person, contributing to the well-being of life of the United States.”

Amadeo was the first speaker in a two-hour-long program. The images of butterflies were prominent on posters and a few people wore butterfly wings as symbols of “the beauty of migration.”

There are no sanctuary cities in Iowa today, but Republican legislators say a few are close to it.

Governor Kim Reynolds has expressed support for the crackdown, saying “far left liberals in Des Moines and Iowa City” need to get the message that being a sanctuary city “is not right.”