You are here: Home / News / Another snowstorm predicted for this first weekend of spring 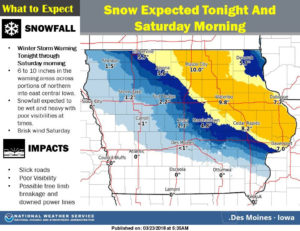 There may be a few songbirds chirping, but the sounds of spring will soon be overtaken with the scrape of metal shovels on concrete and the drone of snow-blowers. Before long, this first weekend of spring will look much more like mid-winter.

Meteorologist Jeff Johnson, at the National Weather Service, says heavy snow is in the forecast for wide sections of Iowa. Johnson says, “We have Winter Storm Warnings out for much of north-central Iowa from the Mason City area as far west as Estherville, down through Waterloo and then to the southeast to Cedar Rapids and then to the Quad Cities.”

That warning runs from tonight  into midday Saturday. Much of Iowa will see at least some snow, but some areas will see eight to ten inches, likely between Mason City and Waterloo, with 6 to 8 inches forecast for Cedar Rapids, Dubuque and Davenport.

“Keep in mind, this isn’t going to be your typical light January snow,” Johnson says. “This is the heavy, wet variety and it’s going to accumulate all over the place, it’s going to stick to the roads tonight. It will overwhelm any warm layer we have there near the surface and just accumulate quickly.” Depending on the timing of the storm’s arrival, some areas of the state could be nearly a foot-deep in snow quite rapidly and power outages are a possibility.

“It’s going to impact travel. If it gets heavy and wet enough and it sticks on things and we get some wind afterwards, we could even see some infrastructure issues, broken trees and power lines perhaps,” Johnson says. “At minimum, it’s going to be a significant hazard to travel.” The first day of spring was this past Tuesday, but it hasn’t felt very springlike this week. Johnson predicts that won’t be changing anytime soon.

“We’re in this pattern of occasional storm systems coming through and we’re primarily on the cool side of these systems, meaning, we could get some brief warming but cooler-than-normal for this time of year and continued wet pattern for the next week or two,” Johnson says. “Nothing real springlike.” This may not be the last snowstorm of the season, either. He says snow isn’t unusual in Iowa well into April.

Keep close tabs on the changing forecast at weather.gov.