You are here: Home / Agriculture / Third annual Vegan Fest is this weekend in West Des Moines 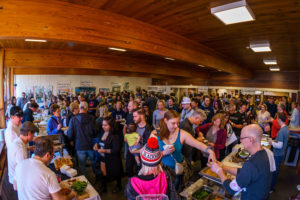 An event taking place this weekend in central Iowa will cater to the growing number of Iowans who are eating a plant-based diet.

Vegan Fest in West Des Moines will feature 40 exhibitors, including many that will be serving food that excludes meat, eggs, and dairy products. Amy Luebbert, president of the group Veglife Des Moines, says this is the third year for Vegan Fest and it’s grown dramatically since 2016.

The nonprofit group Veglife Des Moines was formed after last year’s Vegan Fest drew a much larger crowd than organizers anticipated. A recent “vegan restaurant tour” in the Des Moines area included 20 restaurants that were asked to dedicate their menu to vegan options for one day.

“And all of them expressed that they were overwhelmed by how many people came in and supported the vegan options. We’ve heard from a few that they’re going to continue to have those on their menu and explore more options,” Luebbert said.

A report from research firm GlobalData found only one-percent of U.S. consumers claimed to be vegan in 2014. In 2017, that number rose to six-percent. Several documentaries released in recent years, such as “Plant Pure Nation” and “Forks Over Knives,” have encouraged people to alter their eating habits.

“One released about a year ago called ‘What the Health?’ – that film opened a lot of people’s eyes,” Luebbert said. “I also think meeting other people who are doing this…I wasn’t vegan when I was growing up, but 16 years ago I met someone who was vegan and that changed me forever.”

Luebbert notes, in addition to following a plant-based diet, individuals who identify themselves as vegan also abstain from wearing animal based clothing – such as leather – or using products tested on animals. Vegan Fest is taking place from 11am to 5pm Saturday at the Valley Community Center, 4444 Fuller Road, in West Des Moines.