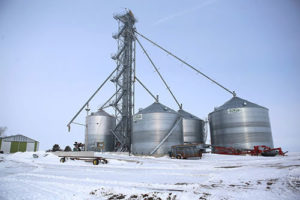 The grain leg that towers over the grain bins is at the center of a dispute in Carrol County.

A Carroll farmer is taking his case to the Iowa Supreme Court after losing a district level appeal in February.

Danner sought and received a building permit from the county zoning administrator in 2013, but after it was constructed, the commission deemed it a nuisance under Iowa code and sought removal of the leg at the Danner’s expense.

The farmers sought a variance from the courts on the premise that the federal legislation and administrative rule preempted the city zoning regulations and that the Danners had entered into an agreement with the Federal Aviation Administration for the retention of the grain leg after the addition of warning lights. On February 23, the Iowa District Court for Carroll County stated in its ruling against the Danners that those standards were not applicable in this case.

The court also stated the removal of the grain leg will enhance the safety of planes landing and taking off at the airport.