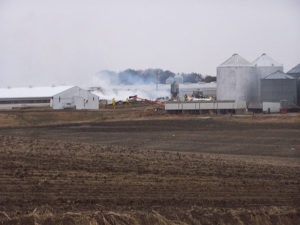 A propane explosion flattened one hog building and damaged others.

Investigators have released the names of two people critically injured when a propane gas explosion destroyed a hog barn and damaged three other buildings Friday. The

year-old Pedro Martinez Alvarado of Remsen. A condition update on the men is not available.

The sheriff’s office reports that approximately 1,200 head of feeder pigs weighing between 30 and 50 pounds died as three buildings caught on fire following the explosion that leveled one building.

Kingsley Fire Chief Paul Huth said Friday that work crews were cleaning the barn on Thursday. He says one of the propane lines was power washed and that knocked rust off and that likely led to a leak that filled the room with propane. The explosion happened when the two men opened the door to the room.