You are here: Home / Human Interest / New pantry at Food Bank of Iowa serves up food and training 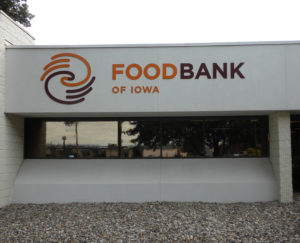 The Food Bank of Iowa added something new to its headquarters location as the facility recently underwent a total remodel.

The building in Des Moines has a food pantry at the location for the first time. Spokesman Danny Akright says the pantry will help those in need in the area — but also has another purpose. “We also implemented this because we are going to use it to train our own staff, to train our partners who are looking to start up their own pantry — and to try new things before we export those to our partners,” Akright says, “so it really is kind of a pantry laboratory.”

The Food Bank facility holds all the canned, boxed and frozen food that goes out across 55 counties. Akright says the food pantry at the warehouse will be run just like all the others. “So it doesn’t have special access to our inventory. We’re ordering for it just like our partners order for their own pantries,”according to Akright. “And then when our clients — we call them guests — come to receive the food, they have the same choices that they would have at any other pantry from non-perishable goods, fresh produce, bread, meat, dairy, that kind of thing.”

Akright says the pantry at the facility will give them a chance to learn more straight from the people they serve. “We’ll have a weekly opportunity where we can talk with people who are receiving our food. Maybe even some of our partners in addition to the pantry here. So, hearing from them directly is just a great benefit of having this pantry here,” Akright says.

Akright says. He says they won’t need to add any staff to run the pantry. “We formed a pantry committee from the staff members who worked the closest with our partners so they know the best about what a pantry looks like, how it needs to operate, that sort of thing. They worked on the implementation of the project,” Akright says. He says now that it is running they rely mostly on volunteers to run it.

The pantry is called “Karen’s Cupboard” in honor of Karen Ford who founded the of Food Bank of Iowa in 1982. Ford worked at the organization until she died in 2008. Akright says with spring now here, they are looking ahead to a busy time.

“We’re really starting to prepare for the summer months when kids are outside of school and they don’t have access to lunch and sometimes breakfast at school — so they need that extra food that is there,” Akright says. ” So, we’re sort of building up our stock and kind of preparing for the summer months as they come up.”

You can find out more about the services of the Food Bank of Iowa and how to donate at their website at: www.foodbankiowa.org.