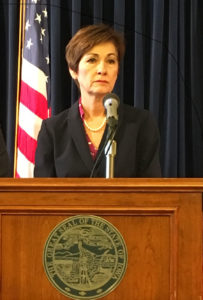 “I hope this sends a really strong message,” Reynolds said. “…I’ve said over and over I have a zero tolerance policy. I can’t legislative morality. I can’t pass a law that says everybody treats everybody with respect, but I can lead and I can set an expectation and that’s what I did. I heard about it and I took action.”

Reynolds said she’s not going to reveal more details of the alleged harassment, to shield the employees who filed the reports.

“Coming forward is a hard thing to do. It takes courage, so at the request of the victims and to protect their privacy and their identity, there is only so much that I can say about the details of the allegations,” Reynolds said late this morning, “but what I can do is emphasize, again, that sexual harassment will not be tolerated in my administration.”

Jamison was well-known in GOP circles. He was appointed by Governor Branstad and Reynolds had the authority to fire him for any reason.

“I have a zero tolerance policy and it’s not selective,” Reynolds said, “so I think that speaks for itself.”

Reynolds and Jamison have known one another since both served as county auditors. Jamison ran for statewide office in 2010, the same year Reynolds ran as Governor Terry Branstad’s lieutenant governor. Jamison had been the Iowa Finance Authority director since 2011. Branstad and Reynolds gave Jamison time during some of their weekly news conferences to tout his agency’s low-interest loans for first-time homebuyers.

In February, Reynolds directed all executive branch employees to re-take anti-sexual harassment training by May 1st. Reynolds told reporters today that she’s taken it, her staff has taken it and the fired administrator did, too.

“As I’ve said time and time again, my administration has a zero tolerance policy regarding sexual harassment,” Reynolds said.

The training outlines steps state employees may take to notify a superior within their agency of alleged misconduct or they may contact the governor’s office directly. That’s what happened in this case.

“And I want to make sure that every employee knows that this is a safe environment,” Reynolds said during her weekly news conference. “…I want them to feel comfortable going to the person that they need to, to file that complaint.”

Reynolds has replaced Jamison with Carolann Jensen, who had been the chief programs officer in the agency.

AUDIO of governor’s weekly news conference; discussion of this situation begins at 16:00