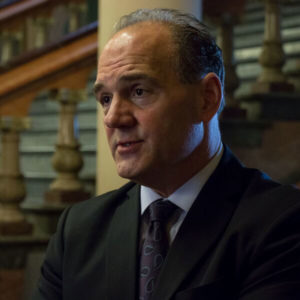 A three-member state panel has ruled Republican Ron Corbett did not meet the legal requirements and his name will not be printed on the June Primary ballot as a challenger to Governor Kim Reynolds.

The panel spent a couple of hours reviewing the paperwork and hearing arguments from attorneys. In the end, they decided Corbett fell eight signatures short of what was required on his nominating petitions.

“Sometimes the scoreboard of life doesn’t fall in your favor and this was one of those days,” Corbett said after the decision.

Corbett could file a lawsuit to try to get his name on the ballot, but his comments after the hearing seem to indicate that’s unlikely.

“It is what it is. I’m the candidate. I’m not going to throw any staff people under the bus or kick them to the curb. That’s not my personality and so the buck stops with me,” Corbett said. “We didn’t get enough signatures and it looks like there won’t be a competitive primary on the Republican side this year, unfortunately.”

On the Democratic side, there are six candidates running for governor in the June Primary.

Iowa’s secretary of state, attorney general and state auditor met for nearly five hours today to review challenges of the nominating petitions submitted by Corbett and seven other candidates who planned to run in the June Primaries.

“This has been a really an unusual year for nominating petitions,” Secretary of State Paul Pate said. “I’ve never seen so many issues come up.”

Pate and his colleagues decided two other candidates were not qualified for the June Primaries. They ruled a legislative candidate was disqualified because he was a registered Democrat when he started collecting signatures to run as a Republican. The review panel also concluded Republican Ginny Caligiuri of Osceola failed to collect enough nominating signatures to run as a Republican candidate in the second congressional district. She plans to challenge that decision in court.

Pate is offering this advice to candidates of the future — don’t fall victim to collecting the bare minimum signatures required on nominating petitions, because some signatures may be ruled invalid.

“I can’t underscore that enough,” Pate said, “and I hope if there’s any message that comes out of today’s set of hearings, you’ve got to do this.”

Iowa candidates running in party primaries must collect the signatures of Iowa voters in order to qualify for the ballot, although the number of signatures varies based on the office a candidate is seeking.

The panel said it does not have jurisdiction to decide whether congressional candidate Theresa Greenfield’s nomination by the Iowa Democratic Party’s third district central committee is permitted by Iowa election law. Greenfield is seeking a different route onto the primary ballot after problems with her nominating petitions.