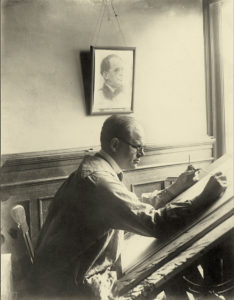 An exhibit that opened this week at Drake University celebrates the life and work of a two-time Pulitzer prize winning cartoonist.
Audio: Pat Curtis report on Darling exhibit. :53

“Ding” Darling started his career in 1900 at the Sioux City Journal. Later, with the Des Moines Register, his political cartoons were syndicated to 150 newspapers in the U.S. Sam Koltinsky is the director of the Jay N. Darling Center in Des Moines.

The exhibit started out as seven pieces of artwork and it has grown to nearly 2,000 square feet,” Koltinsky told Radio Iowa. “I wish that I could say I solicited a lot of this material, but I didn’t, people reached out across the country.”

The exhibition, which runs through May 31, features artifacts and artwork from Darling. Koltinsky calls it the most comprehensive exhibit he’s curated. It includes sketchbooks that haven’t previously been on display. 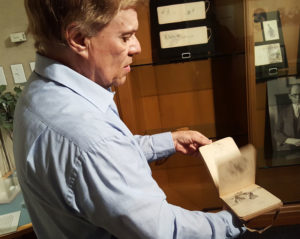 “He always had a sketchbook in his hand. Looking at some of those sketchbooks, I’ve had the honor to explore, they really shine such a beautiful light on this man, his passion, and love for people in this world,” Koltinsky said. “I brought in items that I felt the world needed to see. Some of them are the sketchbooks that have never really been out, exposed to the public. Some of them date back to 1899, when he was at Beloit College (Wisconsin).”

While the political cartoons made him famous, Darling was also an environmental conservationist who was instrumental in the formation of the National Wildlife Federation. “Darling created the first duck stamp in 1934, which has raised millions and millions of dollars across the country to save habitat,” Koltinsky said.

The exhibit’s opening reception is at 7 o’clock tonight in the Cowles (coals) Library on the Drake University campus. Darling received an honorary law degree from Drake in 1926. More than 6,000 editorial cartoons completed by Darling between 1914 and 1948 are part of Drake University’s Archives and Special Collections.