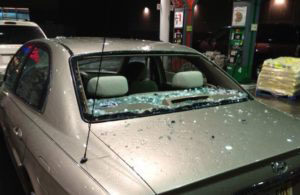 Iowa’s largest auto insurer says the Hawkeye State saw a dramatic increase in hail storms last year and made the top ten list of states with the most expensive losses.

State Farm reports paying out $96 million in hail damage claims in Iowa last year, compared to only about $10 million the previous year. State Farm agent Drew Edmond says if you’re on the road and hear on the radio hail is coming, take immediate action.

“Get to as safe of a place as you can, whether that means your own garage or just someplace that’s enclosed so you don’t have to withstand as much damage as you would driving or having your vehicle exposed to the elements,” Edmond says, “That’s the foremost thing to do when the storm is coming or when you’re in the midst of the storm.”

If you’re at home during a hail storm, he suggests quickly making a move to limit potential damage in every room with windows. “Definitely closing the drapes, closing the blinds and the shades,” Edmond says. “What this can do is reduce the blowing glass that’s broken by the hail. That’s something you can do while the storm is taking place.”

While hail can hit during any time of the year, the most popular season for hail is spring. If you have roof damage after a hail storm, document it with pictures, make temporary repairs to prevent more damage, save receipts and take pictures of your repairs. When hiring a roofer, Edmond says don’t rush into a contract, don’t let yourself be pressured into signing anything and don’t pay up front.

“Get multiple estimates from roofers and don’t just go with the first roofer you see,” Edmond says. “Definitely make sure that it’s someone local that you’re going to be able to get a hold of. A lot of times, if it’s not a local person, they might leave and you’ll never be able to get a hold of them again.” When remodeling, he says to consider impact-resistant roofing to reduce hail damage. The insurer says Iowa ranked ninth among the 50 states for most hail damage in 2017. Texas, Illinois and Minnesota were the top three, with number-one Texas reporting 610-million dollars worth of losses, more than six times Iowa’s figure.