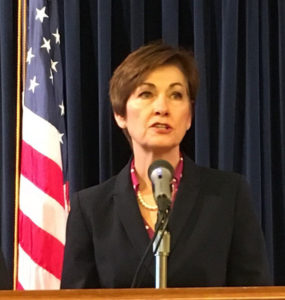 Governor Kim Reynolds has signed 23 bills into law today, including a bill that makes about $25 million in cuts to the current year’s state budget.

The governor’s action officially triggers a reaction through much of state government. Spending must be trimmed in the three months that remain in the current state budget year. The state universities in Ames and Iowa City are hardest hit. Legislators approved about 11 million dollars in cuts to the University of Iowa and Iowa State University.

Brenna Smith, a spokeswoman for Governor Reynolds, issued a written statement, saying Reynolds “is pleased to balance the state’s budget and will continue her work to unleash opportunities for all Iowans.” The cuts are necessary to avoid a state budget deficit. State tax collections, while increasing, are not growing as quickly as expected when the budget plan was created a year ago.

The state’s prison system must cut $3.4 million before June 30th. The Department of Human Services must reduce it’s budget by $4.3 million.

Reynolds previously has said state agencies have been on notice for months that the cuts were coming and her top administrators have been planning for these reductions.

The bill “sends a very clear message that they only value tax cuts for the wealthy and don’t care about leaving working Iowans behind,” Price said.

(This post was updated at 12:21 p.m. with additional information)