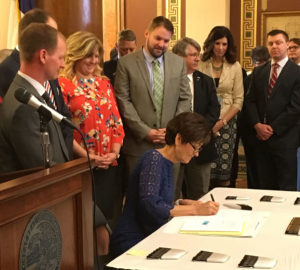 “Our children’s mental health and well-being system isn’t where it needs to be,” Reynolds said. “Yes, we have dedicated providers, but we lack the coordination, consistency and access.”

Reynolds spoke to a large crowd of legislators and advocates who lobbied for the bills she approved today. One man in the capitol held a photo of his son, who committed suicide. Many in the audience shed tears and Reynolds was emotional, too.

“How proud I am to stand here and work with the legislators in both the House and the Senate that came together on this extremely important issue,” Reynolds said, “to pass a comprehensive bill unanimously and I think that deserves a huge round of applause.”

One of the bills Reynolds signed will help establish six “access centers” around the state where health care professionals are available to assess patients who are having a mental health crisis. Another aim of the bill is to create options for Iowans who need an in-patient or residential setting rather than a bed in hospital psychiatric ward. 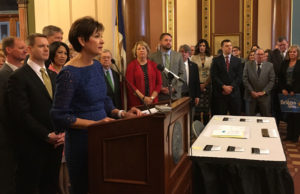 Supporters of the bills surround the governor as she signs.

“Creating the mental health system that we envisioned is complex and it can’t happen overnight,” Reynolds said. “I look forward to building on the momentum that we have here today…because I know that none of us will ever stop looking for ways to provide a more compassionate mental health care to those in the greatest need.”

Reynolds said the two laws will provide a “roadmap” to a more complete mental health care system for Iowans and help schools better identify the early signs of depression and mental health issues in students.

“I know that we can do better and with this legislation we will do better,” Reynolds said.

House Speaker Linda Upmeyer of Clear Lake said it appeared all 150 legislators attended this morning’s event — a signal lawmakers will find money to help counties who shoulder most of the cost of caring for vulnerable Iowans with mental illnesses.

“Remember, the local money — the dollars that are in the mental health system currently — will be the first dollars and we’ll look at ways that maybe we can augment some of that,” Upmeyer said after the bill signing.

Peggy Huppert, state director for the National Alliance on Mental Illness, estimates a minimum of a million dollars in additional state money is needed to start implementing some of the changes.

Huppert told reporters she was struck by how many advocates came to today’s (Thursday’s) bill signing ceremony.

“It’s very emotional because this is a big deal,” Huppert said.