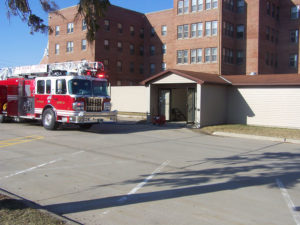 He says a woman inside was preparing meals and noticed smoke and fire coming from a light fixture and called the fire department. Schipper says they put out the light fixture fire shortly after arriving.

“We made entry with a team and they were able to knock that fire down very quickly with a hand line. However, a big area of the ceiling had burned and also from the debris falling down we did have some damage on the laminate as well. We did have smoke damage throughout that senior center,” Schipper says. Schipper estimates the damage to the building exceed $10,000 and may possibly go higher.

No one was injured and the chief says the fire doors helped prevent the fire from spreading into the Floyd Valley Apartment complex. The center’s conference hall sustained enough damage to prevent future activities, at least for the next few weeks.