You are here: Home / Education / University of Iowa students dig into garbage to help recycling effort 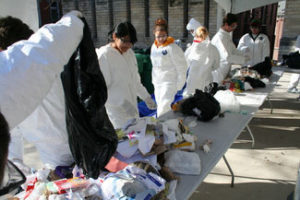 Students conducting a waste audit at the University of Iowa.

A few dozen University of Iowa students will climb into hazmat suits this afternoon and sort through bags of smelly garbage on tables outside the Iowa Memorial Union.

Beth MacKenzie, the U-I’s recycling coordinator, says they do this type of “waste audit” several times a year at various buildings on the Iowa City campus.

MacKenzie says, “We collect trash that’s been generated in the building and then we sort it into different categories to see what types of things people are throwing away and if it should actually be in the trash or if there are opportunities to divert it to recycling or composting.”

Each item that could have been recycled or composted will be recorded and that master list will be used in determining if changes are needed in the system. Thanks to recent audits, she says it’s become clear many tons of trash that now are going to the landfill — shouldn’t be.

“Overall, about 30% of what goes into the trash could actually be recycled in our existing recycling program,” MacKenzie says. “About another 30% could be composted, so that’s a pretty big percentage of the waste stream that we could be diverting.” Students sifting through the refuse in today’s event have an array of majors and interests — from art to environmentalism — though some are just there as professors offered extra credit if they took part.

Over the years, MacKenzie says some unusual items have been discovered in the trash bags.”You run into weird things,” she says. “A lot of times, there’s unopened, never-used items and it’s like, why would that be in the trash? One we did recently, we found a whole apple all by itself without any bites taken out of it.”