You are here: Home / Sports / DeVries happy to be home in Iowa as Drake’s new head basketball coach 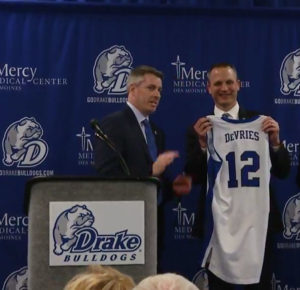 Drake athletic director Brian Hardin introduced DeVries who has been at Creighton for 17 years as an assistant coach and spent 20 years on the staff there. He played college ball at the University of Northern Iowa.

“I can’t tell you how excited I am to be home, this has been a long-time dream of mine, to be not just a head coach, but to be somewhere where I feel at home around so many friends and family,” DeVries says.

Drake has not been to the NCAA basketball tournament since 2008, and DeVries referenced that season and seeing that team play in talking about what he hopes to accomplish for the Bulldogs.

“Ive seen in those flashes what this place is capable of. And we can get it to that level again — not just as a flash, not just on a single night — but on an every night basis. And it will take some time, it will take some time. At Creighton, I’ve been there 20 years and we are up to 17-thousand fans a nigh now. It wasn’t always like that,”Devries says. 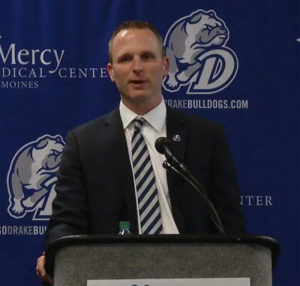 De Vries has been in the running for the Drake job before and was passed over. He was asked why he stayed at Creighton instead of going somewhere else. “When other opportunities came around, that wasn’t where I wanted to be. When this one came around –several times,” he paused as the crowd laughed and he chuckled too. “This is what I wanted and I didn’t give up on that,” Devries says. “Because I see something here. I know what this job is, I know what this is about, I know what can work here and that is why I wanted to be here.”

De Vries will replace Niko Medved who left Drake for Colorado State after one season.