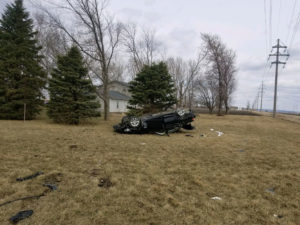 It took just two hours for northwest Iowa authorities capture the suspect who allegedly robbed the United Bank of Iowa in Moville today.

“We got information from pinging the car that it was down in the Port Neal area. One of the troopers came in on Port Neal and there was a black car along side of the road changing a flat tire,” Wingert says. “It matched the description, so he turned around…The trooper went to detain him…The male said, ‘No,’ got in the car and took off on a flat tire.”

“When he went across the railroad tracks right by Highway 75, he went airborne and lost control, continued a few hundred yards where he ultimately hit the ditch embankment,” Wingert says. “That caused him to flip up over the road and come to rest in somebody’s yard.”

The suspect was taken to a Sioux City hosptial for treatment. His name has not been released.