You are here: Home / Sports / Iowa native’s move closer to home lands him in midst of Loyola’s dream season 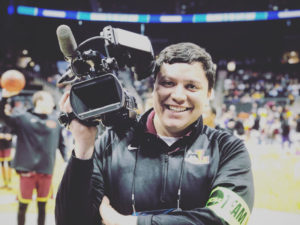 A Cedar Falls native has been along for the ride as the Loyola of Chicago basketball team has become the darling of America in the NCAA tournament.

Austin Hansen graduated from Cedar Falls High School in 2012 and then the University of Northern Iowa in 2016. He worked for one year at Tulane University in New Orleans before moving to Loyola to become the team’s director of video for athletics. “It’s been awesome — especially in my role since we don’t have football at Loyola, mens’ basketball is our biggest sport,” Hansen says.

Loyola won the Missouri Valley Conference to get a bid to the tournament and then went on a run that has them poised to play in this weekend’s final four. Hansen isn’t surprise the team has made it this far after following them from the start.

“I’ve actually been traveling with the team the whole season, which has been awesome because you just kind of got to see them emerge from the beginning,” Hansen says. “We knew we were going to be okay this year — I believe we were a preseason three in the Valley and then won a couple of those nonconference games and then all the way through he Florida win — which was huge beating Florida down there.”

It’s not only been a dream season for the team, but the job he took to get closer to his home in Cedar Falls has also become a dream position. “From my prospective it’s been amazing to be able to document the season from everything in the headlines to the national attention the school has been getting,” according to Hansen. “For example, we got back from the Elite Eight game and the entire skyline of the was lit up in Rambler colors. The spires on the Willis Tower, there was a building downtown where the windows spelled ‘Go Loyola’ in the windows.” He says that’s unusual because it is such a pro sports city and they haven’t had a lot to cheer about in the college tournament. “Obviously Northwestern had their huge drought ending season last year and to follow in their footsteps has been really special,” Hansen says.

Though he now works for Loyola, Hansen still follows the Purple and Gold, and says he has an overall love of the Missouri Valley Conference. “The schools are the perfect size where you really can get to know players, you can get to know individuals. It’s a Midwest league — so everybody is super nice all the time,” Hansen says. “But I still love the Panthers and love the Ramblers and it’s a fierce internal rivalry.” He says the hardest sporting event he had to watch was when Loyola played UNI in the MVC tournament as he knew one of his favorite teams had to lose. All the extra attention has kept him busy in San Antonio as he says they had 60 media outlets at their Final Four practice. And then there’s the added attention on the Ramblers top fan — 98-year-old Sister Jean Smith.

“That’s been fun too because we’ve almost as many requests for the team and the coach as we had for Sister Jean….she’s a spitfire,” Hansen says. Hansen says the team has overcome all obstacles to far this year and he expects them to come out with the same attitude when they take on Michigan this Saturday at 5:09 p.m. He’ll be there to chronicle either the win and move into the championship game — or to wrap up the phenomenal season and the school’s first trip to the Final Four since Loyola won the National Title in 1963.