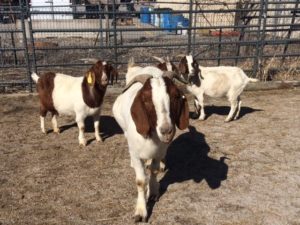 A fundraiser tonight for the Animal Rescue League of Iowa will have yoga enthusiasts doing their downward dogs beside a gaggle of goats.

Stephanie Filer, director of development for the ARL, says it’s their first “goat yoga” event and it promises to be a smashing success.

“We sold out in less than 12 hours,” Filer says. “We actually opened a few more spots after we looked at the space and raised the list to let in 10 more. We have 50 people coming to the event and we’ll be raising over $1,000 tonight.”

During the outdoor event, yogis will be going through their routines on their mats in the midst of seven wandering adult goats. The setting is Bailey’s Dog Park at the Rescue League in Des Moines, a park that features agility equipment for dogs. That equipment will be a playground for the nimble goats.

Filer says, “In some goat yogas, the goats are jumping on people but because of the size of these goats — and they’re a little shy — we have it structured so the goats are going to be more in the environment and less on the people.”

This is the second yoga event the ARL has sponsored that features animals — the first one employed the use of kittens and adolescent cats.

Many people practice yoga for a mixture of meditation and relaxation as well as strength training and to gain flexibility. Filer says having the goats romping around amongst the yogis is a welcome distraction.

“Also, our animals, in general, provide a calming factor for people,” Filer says. “In this situation, both by doing it outside and doing it with the goats, we’re hoping it provides a therapeutic option for people, especially for city people who don’t get to interact with goats very often.”

The goats were all in the ARL’s Second Chance Ranch adoption program. After tonight’s event, they’ll be headed to their new home — working with an Iowa lawn care business.