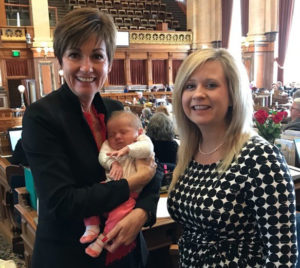 The baby and the bassinet will be gone from the Iowa House next week.

“Ladies and gentlemen of the House, it’s a bittersweet day at desk 83,”

That was the announcement Representative Megan Jones of Sioux Rapids made Thursday in a speech on the House floor.

“Alma is formally announcing her retirement from the legislature.”

Alma quickly added her voice to the announcement — a loud wail. Alma is the two-month-old daughter of Representative Jones. Alma was born January 24. When Jones headed back to the legislature in February, Alma was too young for daycare, so Alma went to work with her mother at the capitol.

“It certainly isn’t lost on me the sacrifices you all made, to accommodate our special situation,” Jones said, holding a wiggly and fussy Alma in her arms.

“It really does take a village,” Jones joked.

“I know that you’ve tried to hold meetings and she’s been having an epic meltdown, so it’s very much appreciated that you’ve put up with us,” Jones said.

Jones noted two other legislators had to take their suits to the dry cleaners after a burping session with Alma.

“Thank you all — really for accommodating this mom,” Jones said, crying adult tears during her own speech, “…so that I could do this and I could still make sure that my constituents had a voice here at the capitol.”

As for Alma’s “retirement” from the House, she’ll be in day care when the legislature convenes next week.

“So Monday, the chamber will probably be a little quieter, but I can assure you — you haven’t heard the last from her,” Jones said — with Alma cooing in approval from a few feet away. “We chose to decorate her room with the words of Shakespeare: ‘Though she may be but little, she’s fierce.'”

AUDIO of speech from Megan Jones (and Alma) in House, 3:00