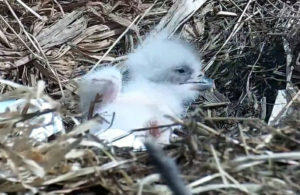 A popular website focused on a bald eagle’s nest in northeast Iowa is getting even more attention than usual this week.

John Howe is executive director of the Raptor Resource Project, which runs the bald eagle webcam near the Decorah Trout Hatchery. He says an egg that was laid February 21 began opening up late last Friday. By Easter Sunday morning, an eaglet cracked out of the shell.

“It was pretty neat to watch,” Howe said. “We had our hatch of our 29th eaglet out of that nest.” D29 is the first eaglet born this year to the bird known worldwide as Mom Decorah.

“The eaglets are hatching and this is probably one of the most watched, most loved time periods in the life cycle of the eagle that people are watching,” Howe said. There are two more eggs in Mom Decorah’s nest and Howe noticed a small hole developing in one of them this morning.

“So, it looks like we are on our second hatch in progress,” Howe said. “It would be D30 if that hatch is successful. In another three or four days, we’ll probably have the third egg hatching.”

Mom Decorah is believed to be around 15 years old. The young eaglets will remain in the nest through the summer, likely dispersing sometime between August and October.