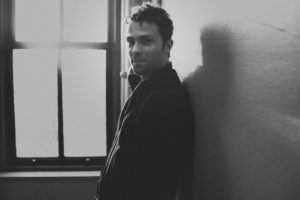 A world-touring magician brings his down-to-earth show to his home state of Iowa this week.

Staniforth says the magic industry is shifting away from how it was in decades past, where there was just one “it” magician who all the others worked to copy.

“When I was growing up, everyone tried to be David Copperfield, and then it was David Blaine and then it was Criss Angel,” Staniforth says. “The thing that’s happening with magic now is that it’s splintered, just like music did. There are so many different genres of magic and so many different styles of magic that everyone’s doing their own thing. That’s great. It’s what magic has needed for a long time.”

There are no smoke machines or lasers in Staniforth’s performance and he won’t try to make the golden dome of the state capitol disappear. Magic, he says, should be about instilling astonishment in the audience.

“I’m not interested in comedy. I’m not interested in showmanship or dancing or stage pyrotechnics or any of the Las Vegas trapping normally associated with magic,” Staniforth says. “I have one goal in my show and that’s to give people that sense of awe. It took me a long time to come to that but you have to wear the suit that fits.”

Staniforth lives in Iowa City but tours the planet six months out of the year. At one stage in his career, the 35-year-old says he became disillusioned with the world of professional magic — and the world itself — and discovered he had to return to his roots.

“I am not a great entertainer, I’m not a great comedian, but in my show, I can make you believe in magic,” Staniforth says. “That, to me, is more entertaining than any of the other sort of wrapping paper that is usually associated with magic.”

At age nine, Staniforth decided he would be pursuing a career in magic and he never looked to anything else. He was the only magician in Ames, which was both an advantage and a challenge.

“The closest magic shop was in Des Moines and for a nine-year-old, that’s essentially like having it be on Mars,” Staniforth says. “So, I had to do it all myself. I had to invent my own magic. I could read magic from the library books but that only gets you so far. I had to invent material and perform. If the Boy Scouts in Ames wanted a magic show, I was their only option.”

By age 11, he was performing at birthday parties, banquets and farmers markets, honing his craft. Earlier this decade, he won acclaim hosting the hit TV series, “Breaking Magic,” on the Discover Channel. His memoir, “Here is Real Magic,” was released in January by the Harry Potter-famed Bloomsbury Publishing.

Staniforth is performing this Friday and Saturday night at the Temple Theater in Des Moines.