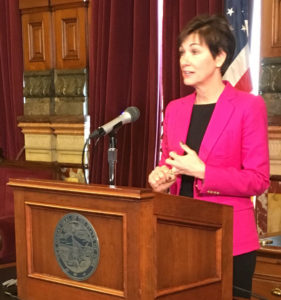 Markets are reacting to the 25% tariff China imposed on U.S. pork today. Hog prices are down. Stock prices for Tyson Foods, the world’s second largest meat company, are taking a hit.

Republican Governor Kim Reynolds today said she’s an advocate for “free and fair trade” — but the tariffs President Trump imposed on Chinese steel and aluminum are having a negative impact on the Midwest.

“When I disagree with the president, I’m not afraid to step up,” Reynolds said.

Reynolds said she’ll use any opportunity she can to encourage Trump and his governing team to resolve the impasse without elevating the dispute even further.

“There are issues with China, especially when it comes to intellectual property and tech transfer. We’ve let that escalate to the place that it shouldn’t. That also has an impact on our economy and on manufacturing, so we need to figure out a way to hold them accountable, but we need to make sure we don’t have unintended consequences by getting into a trade war,” Reynolds said. “Nobody wins in a trade war.”

China is a top destination for Iowa soybeans, but the Chinese did not include soybeans in the 128 products included in its tariff list.