You are here: Home / News / IRS asks you to review the amount of money withheld from your check 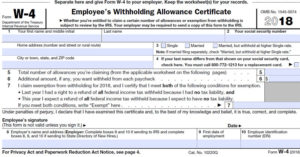 As the federal filing deadline approaches for 2017 taxes, the Internal Revenue Service is asking you to be sure everything is in place for this year’s taxes.

IRS spokesman, Christopher Miller, says you should do a “paycheck checkup” to make sure your are having the right amount of tax taken out of your paychecks.

“You can do a paycheck checkup rather easily by going to our website irs.gov and using a special tool called a withholding calculator,” Miller says. He says it is an easy tool to use.

“You put in some information from your pay stub and your tax return and it’ll help you determine whether or not the right amount of taxes is being withheld for your paycheck for your particular situation,” according to Miller. Miller says changes in the tax law may have made the withholding amount you’ve been using the wrong one for you to use now.

“We always encourage taxpayers to check their withholding regularly. But it’s even more important now because of the new tax law,” Miller says. “The new tax law will change the way many of us calculate our taxes. And that change may mean we want to adjust our withholding.” He says if the withholding is wrong you could end up taking out too much during the year.

“People may not realize that the typical refund these days is topping out at about 28-hundred dollars,” he says. “And there may be families who want to have that at the front end in their paychecks, rather than waiting until tax time to get that in the form of a refund.” Miller says those who have a more complicated tax return may find the tax law changes have a bigger impact on their withholding.

“More complicated situations include: two-income households, people who have more than one job at one time, people who have a job for only part of the year, individuals who itemize deductions, people who have children or dependents and who file the Child Tax Credit,” according to Miller. Miller says it’s important to check your withholding now so you have time to make an adjustment before we get too far into this tax year. He says some 1.5 million Iowans are expected to file federal tax returns this year.