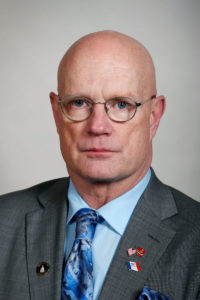 The Iowa House has voted to crack-down on Iowa cities or counties that fail to cooperate with federal authorities seeking to deport immigrants who entered the country illegally.

“These are all traditional levels of cooperation that take place every day across the nation and across most areas of Iowa,” said Representative Steven Holt, a Republican from Denison who was the bill’s manager during today’s House debate. “…This legislation is about the rule of law and the safety of all people, citizens and immigrants alike.”

Representative Bruce Hunter, a Democrat from Des Moines, accused bill backers of being “narrow-minded” and prejudiced against Latinos.

“There are no sanctuary cities in Iowa,” Hunter said. “None. Nada. Nothing.”

Last year, the Iowa Senate passed this “anti-sanctuary cities” bill. In February, Republican Governor Reynolds said the bill will send a message to “far-left liberals” in Des Moines and Iowa City. Representative Greg Heartsill, a Republican from Columbia, today said the bill’s necessary because of a “politically correct movement” that encourages public officials to “turn a blind eye” to lawlessness.

“This issue didn’t just come out of nowhere,” Heartsill said. “This issue, in my opinion, has been thrust upon us — provoked, if you will — by local municipalities across this country for whatever reason that have decided to thumb their nose at the rule of law and, as a consequence, put the lives of citizens and non-citizens at risk.”

Representative Todd Prichard, a Democrat from Charles City, said the bill will endanger the freedom of immigrants who are legally living in Iowa.

“Do you value people, human dignity, freedom, individual liberty and treating everyone who finds themself in this state with respect?” Prichard said. “Or do you value fear and the politics and the policies that come along with that fear and misinformation?”

“The role of the government according to the Bible very simply is to punish evil and reward good,” Wheeler said. “This bill is very consistent with Romans 13.”

“I’ll watch the bill pass and I’ll think to myself: ‘Forgive them, Father, for they know not what they do,'” Gaines said.

Debate on the bill lasted about four hours. The bill passed the House on a 55 to 45 vote.

House Republicans made a slight adjustment in the bill, voting to restore state funding after a 90 day lapse if a local government rescinds any “sanctuary” policies. Senators will have to review that change in the legislation.