You are here: Home / Crime / Courts / Newton and other cities look at a new way to deal with fireworks violations 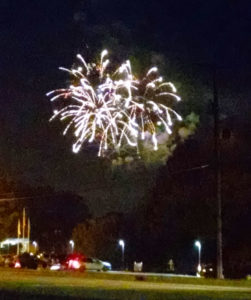 Newton is one of several Iowa cities are looking at a new avenue to deal with illegal use of fireworks. Newton Police Chief Rob Burdess told the city council last night that it was difficult to enforce fireworks regulations when their use became legal this past year because they could not use what is called a “municipal infraction” for enforcement.

“Because of the way it was written in the state code we could only enforce those using a simple misdemeanor. There’s a big degree of difference in the burden of proof required for a municipal infraction — which is a civil offense — versus a simple misdemeanor — which is a criminal offense,” Burdess says. Burdess told the city council a majority of the complaints the police and fire department receive are for the use of fireworks at unauthorized times. He proposes using a so-called “Social Host” subsection of the current ordinance. Chief Burdess says it’s similar to the “House of Ill Fame” ordinance the city council approved two years ago.

City Attorney Matthew Brick and his firm wrote the “Social Host” proposal which has already been adopted by a number of other communities. Brick cautioned the council that the fireworks version may or may not survive a State Supreme Court challenge.

“We’re not going after the person who lights the fireworks off — we’re going after the property where they were lit off from. So, there are similar ordinances that our supreme court has upheld, and we are using a similar type of argument,” Brick explains. He says there’s no guarantee the court would say this type of ordinance can be sued for fireworks.

“Honestly it’s an open question. I’d says eight of our clients have adopted similar language,” Brick says, “we’ve drafted almost the same ordinance for Muscatine, Ankeny, Waukee, Polk City, Mitchelville, Windsor Heights. If we are wrong, we are all going down together.”

The Newton City Council unanimously approved the proposal last night. They must vote on it at least two more times before it’s adopted. Chief Burdess says between June 1st and the end of last year, there were 225 firework complaints in the City. That’s a 330 percent increase from 2016, when there were only 52. On July 4th there was also one serious fireworks injury to a child.