You are here: Home / News / Put the garden shovel away and bring the snow shovel back out 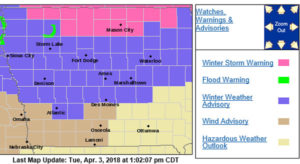 Spring officially arrived two weeks ago today, but many Iowans are dealing with yet another blast of winter.

National Weather Service Meteorologist Ken Podrazik says snow will be falling through this evening with the heaviest amounts over northern Iowa.

“Along the northern two tiers, from Algona to Mason City – north to the Minnesota border, could see anywhere from four to six inches,” Podrazik said. “Along the border there, they could see a six to eight inch snow band.”

Locations along Highway 20 can expect one to three inches of snow. Most of the southern half of the state will receive rain. Northwest winds will also increase, reaching speeds of 20 to 40 miles an hour this afternoon and evening. Some unusually cold conditions for the first week of April will arrive tomorrow morning.

“Lows are going to be dipping down into the single digits across northern Iowa and in the lower-to-mid teens in central and southern Iowa,” Podrazik said. Wind chill readings, in northern Iowa, could hit five to 10 degrees below zero. A slight warm up will arrive on Thursday, but another cold spell returns for the weekend.

“Normal highs for this time of year are in the upper 50s and normal lows are in the middle 30s,” Podrazik said. “We’re several degrees below that and unfortunately, we’re going to stay in the cold throughout much of the week and into the weekend.”