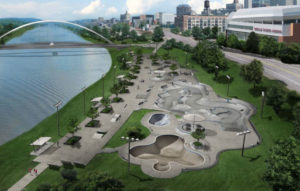 A Des Moines businessman has donated $1 million to an effort to build a large skatepark in Iowa’s capital city.

At a news conference this morning, Nix Lauridsen said he was frustrated to see the project was struggling to take shape, more than a decade after it was proposed. “All I had to do was sign my name to a check, but it was a big check,” Lauridsen said. The $3.5 million skatepark, to be built along the Des Moines River near Wells Fargo Arena, will be called Lauridsen Skatepark.

Brad Anderson, the project’s campaign co-chair, says donations from the Lauridsen Family Foundation and others mean the dream of placing a world-class skatepark in downtown Des Moines will become a reality.

“We have raised $2.5 million of a $3.5 million project,” Anderson said. The 65,000 square-foot skatepark would be one of the largest in the country, according to Anderson. He’s now hoping to attract at least 1,000 more individual donors.

“That can be anywhere from five dollars to one million dollars…however much you’re willing to contribute to this important project,” Anderson said. Construction of the skatepark could begin in the fall. The City of Des Moines donated two acres of land for the project.