You are here: Home / Crime / Courts / Man charged in Des Moines after dozens of cats found in his home

A Des Moines man is now facing charges after dozens of cats were removed from his home last month.

Fifty-five-year-old Leland Moffitt was arrested Tuesday and charged with multiple counts of animal neglect. Officials with the Animal Rescue League of Iowa said 32 living cats were taken out of Moffitt’s home.

Police had been sent there on an odor complaint. In addition to the living cats, 17 deceased cats were found in the home. 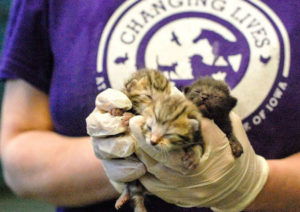 Some of the kittens found in a Des Moines home.