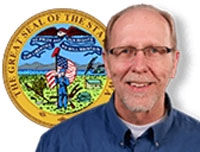 The Thomson Correctional Center only holds 344 inmates though it’s designed to house more than twice that many. Loebsack, a Democrat from Iowa City, says “ongoing battles” in Washington D.C. are making it difficult to ensure the prison’s federal funding will continue.

“Now, with the most recent threats on the part of the president and the Republicans, perhaps all of the funding we approved for this fiscal year through September 30th may not be spent,” Loebsack says. “This creates a lot of problems and uncertainty for a facility like this.” The Federal Bureau of Prisons has been working to make improvements at the Thomson, Illinois, prison to get it ready for more federal inmates.

“I think going forward, it could be in the next year or so that everything is finalized,” he says. “All of the construction they’ve been engaged in will be finished and then they can start receiving more prisoners at that point.” Among the improvements, Loebsack says the original computer systems have been replaced and a couple of small “out-buildings” are being added for training and storage.

Loebsack says he’s working in Congress to be certain the promised money is there. “And making sure that this appropriations process, the funding process is stable and doesn’t always go up to the last minute and force us to have to have a continuing resolution,” Loebsack says. “That doesn’t serve anybody’s interests, as far as I’m concerned.”

Loebsack says people in his Iowa district just want Congress and the president to work together and solve the problem. Thomson employs 224 guards and other workers. The State of Illinois built the 800-bed prison in 2001, but sold it to the federal government nearly six years ago.