You are here: Home / News / Judge rules against Corbett’s bid to be placed on June Primary ballot 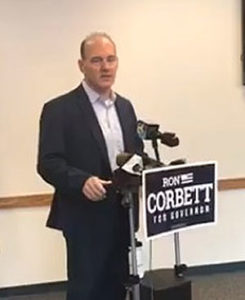 Ron Corbett’s gubernatorial campaign has come to an end.

Last June, Corbett launched his bid to challenge Governor Kim Reynolds in the GOP Primary this June. Corbett’s nominating petitions were challenged and a state panel ruled he didn’t collect enough signatures to qualify for the ballot. Corbett asked a judge to review the case, arguing some crossed-off signatures were valid.

This morning, the judge ruled against Corbett. Corbett will hold a news conference later this morning. Corbett has previously said he would not run as an independent candidate.

Governor Kim Reynolds issued a written statement, through her campaign.

“I want to thank Ron Corbett for his commitment and service to the people of Iowa. Now is the time for the Republican Party to unite and I look forward to leading our team to victory up and down the ballot this November,” Reynolds said.