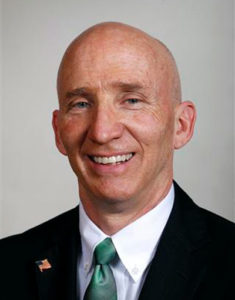 Supporters of programs that allow public funding of private education rallied at the Iowa Capitol Wednesday along with hundreds of students.

They’ve been pushing for new laws that would give state money to students enrolling in private schools — but they have yet to get any of their priorities to the full House or Senate for debate. Trish Wilger heads two organizations that advocate for school choice.

“We know it’s a difficult budget year for one thing and that makes it tough to do new programs and new initiatives so we knew that going in that there was going to be a budget crunch and it would be tough. We’re still optimistic though,.” Wilger says.

“This year, the bill was introduced in my education committee. We were one vote short of getting it out of committee. One vote short. I don’t know where it is on the Senate side. But that’s farther than we’ve ever got on this bill.” Rogers says he’ll keep working on it next year. The Senate bill referenced is eligible for debate, but hasn’t made it to the full Appropriations Committee.