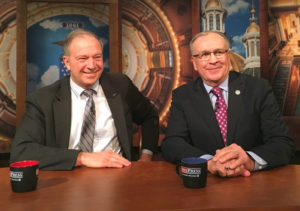 Two Iowa ag leaders say the impact of already-imposed tariffs and the threat of new ones will be felt in the agricultural sector for years, perhaps decades to come.

Hill said “any potential for profit in 2018” was wiped out this week and it’s a “very scary” time for farmers — despite assurances from Trump Administration officials that this is just a negotiating phase.

“The cavalier comments that came from Wilbur Ross, the secretary of commerce when he said, ‘Even shooting wars end in neotiation.’…Shooting wars end in casualties and collateral damage,” Hill said. “Whether there’s a victory or defeat or settlement, we are in a trade war and trade wars don’t end well. They’re unpredictable.”

History shows a trade war led into World War II and the Great Depression, according to Hill.

“This is not a very good place to be,” Hill said. “…I’m a little bit taken aback by this attitude that’s come from the White House. It’s a very serious matter and Iowa is going to be the first casualty.”

John Weber, a former president of both the Iowa Pork Producers and the National Pork Producers Council, said China’s pork tariff is already on and the “day of reckoning” is here.

“These types of negotiations are long-term,” said Weber, who is also a guest on the IPTV program. “They’re not something that happens in a week or a day or a short period of time. It will take a long time to recover from the tariffs that are already implemented or already talked about and we are entirely dependent on trade in the state of Iowa and, as pork producers, in particular.”

A quarter of the pork raised in the Iowa is exported.

“The growth of our industry is entirely dependent on future export markets,” Weber said.

Weber indicated young farmers are most vulnerable, financially, because they’ve borrowed money to get started in the business. Steel prices have already increased costs for farmers buying grain bins or putting up hog confinements.

“It seems to have been the practice of this administration to call people out on the table up front and then negotiate later,” Weber said. “Maybe that tactic will work, but, believe me, it’s a very uncomfortable time for those of us that are involved.”

President Trump has directed Ag Secretary Sonny Perdue to come up with way to shield farmers from the financial drag of these trade disputes, but Hill said that’s unlikely.

“The Farm Bill’s yet to be drafted…Congress doesn’t have the money to fix this,” Hill said. “…I don’t know how you make farmers feel better with a promise of some reward from government and it will be years before that happens.”

Both Weber and Hill say President Trump is still popular in farm country, partly due to regulatory decisions from the Trump Administration. The Iowa Farm Bureau’s president, though, warns “some minds may be changed” if this “cascade” of trade sanctions “gets completely out of control.”