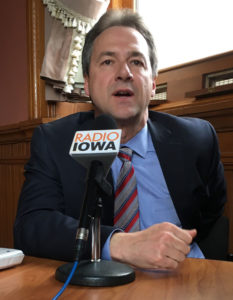 Montana Governor Steve Bullock said he’s in Iowa today to help his fellow Democrats prepare for the 2018 election, but there’s a 2020 calculation here, too.

Bullock isn’t ruling out the idea he might run for president and this is Iowa — host to the first round of voting in the nominating process.

“Being a western governor in a state that Donald Trump won by 20 points, yet being able to get progressive things done, I have an important voice for the party and it is an important voice as we go toward 2020,” Bullock said Thursday afternoon during an interview with Radio Iowa.

Bullock won re-election to a second term as Montana’s governor in 2016. He’s a Democrat working with a Republican-dominated legislature. Bullock points to expanding Medicaid, spending state tax dollars on preschool and requiring more public disclosure of campaign donors as bipartisan accomplishments in Montana.

Many Democrats seem enthused about potential White House candidates from the party’s liberal wing, but Bullock is unapologetic about being labeled a moderate.

“If the idea of being a pragmatist is that I’m willing to work with folks on the other side of the aisle to get things done that matter, that I’m o.k. with,” Bullock said. “We can’t just be against and, unfortunately, what we’re seeing a lot, in a lot of places, is just: ‘We’re against Donald Trump.'”

Bullock argued Democrats must channel their energy toward reshaping the party’s brand and convincing voters Democrats care about “pocketbook issues” and share their desires for a good job and a safe community.

“We as a party and individuals need to actually be showing up in places other than the coasts,” Bullock said.

Bullock rejects the notion that “microtargeting” and assembling constituency groups under the banner of the Democratic Party can win the presidency.

“Even if you can do that, you’re going to lose the ability to have a governing majority if you’re not talking in places like Michigan or Wisconsin or Montana or Iowa when it comes to the General Election,” Bullock said.

Bullock, who by law cannot seek a third term as Montana governor, will become chairman of the National Governors Association this summer. He’s formed a political action committee which is financing his political travels. He also plans to use his Big Sky Values PAC to make contributions to Democratic candidates around the country in 2018. It’s all the kind of positioning presidential candidates of the past have made.

Bullock, who is the former attorney general of Montana, headlined a campaign fundraiser for Iowa Attorney General Tom Miller last night. He’s met with Democrats in the Iowa legislature yesterday and he’ll have a meet-and-greet with Polk County Democrats this evening.