You are here: Home / Education / University of Iowa wins federal dollars for research on nuclear waste 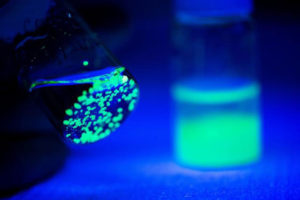 Researchers at the University of Iowa have been awarded nearly four million dollars in grants from federal agencies to continue studying ways to deal with spent nuclear fuel.

The waste is stored across the country in water-resistant metal tubes that are decades old and have become susceptible to corrosion. U-I Tori Forbes, says one area of the research is to find a better way to store the material. “We are particularly focused on the chemistry of nuclear materials. Most of the nuclear materials that we are interested in is the stuff that comes from waste — commercial spent nuclear fuel. So, that’s subset of our grants that we have,” Forbes says. She says other material comes from the military, and overall there’s a lot out there.

“If we were just to take all the high-level nuclear waste that we currently have in the country, it would fill up Kinnick Stadium,” according to Forbes. “So, that’s just the high-level waste. That doesn’t include the 20 million liters of liquid waste that we have as well.” She is an associate chemistry professor and says a key issue they face is the material they are working with can remain dangerous for a very long time.

She says the problem is how to keep the waste safe and prevent the public from being exposed to radioactivity. “And how can we do so in a time frame in which we are dealing with the was for a least a thousand years,” Forbes says. “And so that’s part of the issue we currently have in the United States is we don’t really have a good solution about where to put it.” The material is dangerous enough to kill researchers with too much exposure — so they try to study isotopes that are less radioactive. Forbes says for example uranium has three major isotopes 238, 235, 234.

“Uranium 238 is not too bad in terms of radioactivity. Uranium 235, that’s the stuff they use in weapons, that’s pretty hot. And so what we try to do is study uranium 238, the radioactivity is not so bad — but chemically it behaves pretty much the same,” according to Forbes. Forbes says while they look for ways to safely store the material, other research is ongoing to find ways to continue using it.

“With our current light-water reactors we’re really only using about two percent of the energy that’s in that original fuel rods We are basically taking 98 percent of the energy that’s left and not doing anything with it,” Forbes explains. “And so there is a lot of interest in terms of even what’s going on here in how we can use those waste products so we can put them into different reactors and continue to use that energy.” Not only is the nuclear material itself hot, but it is also a hot topic politically. Many people don’t want to have the storage anywhere near their homes or town.

“The interesting thing to think about is the fact that one in three Americans live about 50 miles from high-level waste right now, because it is stored on site at these nuclear reactors,” Forbes says. “So even though it is sort of ‘not in my backyard,’ it actually is in your backyard right now.”

The funding for the research comes from the Nuclear Regulatory Commission (NRC), the Department of Energy, the National Science Foundation, and the National Institutes of Health.