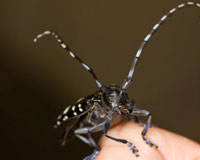 One day soon, the snow will stop falling, it will warm up and start to feel like spring. When that day arrives, so will ants, spiders and other creepy crawlers.

The U.S.D.A. offers Iowans a website that’s a clearinghouse of all sorts of invasive insects that could threaten our gardens, trees, yards and crops. Greg Ibach, Under Secretary of Marketing and Regulatory Programs, says the growing trouble with emerald ash borer is well publicized, but other pests may not be as familiar.

Ibach says, “Gypsy moth, Asian longhorned beetle, European cherry fruit fly, they’re all things that we’re worried about spreading into Nebraska and Iowa.” The emerald ash borer is in 55 of Iowa’s 99 counties. Infestations in Marshall and Tama counties were confirmed late last month. The website, HungryPests.com, details the top 20 types of bugs that are now — or could soon be — a problem and how we can try to stop their spread.

“When you travel or go camping, make sure you’re not taking your wood with you,” Ibach says. “Pick up the wood you’re going to burn at your campsite there in the local area so that if there’s a pest in the wood from your home area or vice versa, you’re not transporting it.”

Firewood isn’t the only way insects may be trying to hitchhike to a new venue. “Some of the camping equipment and toys and chairs and barbeque grills you’re carrying could have egg masses or insects themselves attached to that,” Ibach says. “Take a good look at those, clean them up and make sure you’re not transporting pests that way.” There’s also a worry about people who may be trying to bring back a treat for themselves or as a gift for someone else from their far-away vacations.

“If you travel abroad, it’s very important that you follow the rules that Customs has posted,” Ibach says. “We’re especially concerned about fruits and vegetables and meat that is coming into the U.S. from other countries. That’s the most likely way that we will bring a disease or a pest into the U.S.”

With the growth of e-commerce, Ibach says invasive pests can also travel through the mail. If you’ve ordered a package from outside the U.S., he says to inspect it closely inside and out to insure there isn’t anything attached that could be harmful. Damage from these pests costs our nation $40 billion each year. Since they have few natural predators here, the insects can wreak havoc on our environment, ecosystems and economy, putting agricultural exports and jobs in jeopardy.