You are here: Home / News / GOP tax plan descriptions range from ‘illogical’ to ‘gravy on my taters’ 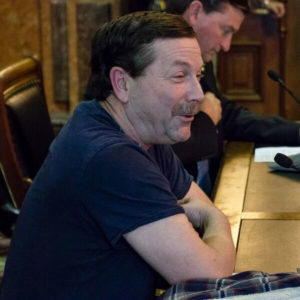 Uber drivers, lobbyists and even a recent candidate for governor were among those who had a chance to publicly vent about Iowa taxes tonight during a public hearing at the state capitol.

Republican Governor Kim Reynolds has proposed a plan that ultimately would cut taxes by about $300 million a year. House Republicans are using that plan, focused on cuts for individuals, as a template, but haven’t revealed their own bill yet. Ann Discher of the Iowa Child and Family Policy Center said state tax cuts don’t make sense because the state is “already struggling to keep up” with its obligations.

“Cuts like these would inevitably reduce Iowa’s ability to do the things that we need to do,” Discher said.

Jon Dunwell, a businessman from Newton, said it’s been 20 years since Iowa income taxes were reduced.

“I work hard for my money,” Dunwell said. “…I would like the privilege to use more of my resources to make a difference in my community.”

Brad Hudson of the Iowa State Education Association, the state teachers union, argued it was “illogical” for Republicans to cut taxes at this time.

“Your priority is to millionaires and out-of-state corporations, not Iowa’s children who are the future of this great state,” Hudson said.

Gary Leffler of West Des Moines, the next speaker, responded to Hudson.

“I look at what the state of Iowa’s doing here to cut our taxes and I say: ‘You know what? I appreciate what you’re doing. You’re putting a little gravy on my taters,'” Leffler said.

More than a handful of those who spoke were from banks or credit unions — institutions that are feuding over a Senate GOP plan that would impose a new income tax some of the largest credit unions in the state.

Uber drivers and lobbyists for taxi companies lobbied against charging the sales tax on their rides. They argued ride-sharing services and taxis are not just for “the affluent” but are often used by Iowans who can’t drive themselves because of a disability or because they don’t have a car.

Ron Corbett, the former Republican candidate for governor who just failed to qualify for the June Primary ballot, argued against imposing a new tax on “apps” like Apple TV, Pandora or Netflix. Taxing “the new economy” will inhibit growth, according to Corbett.